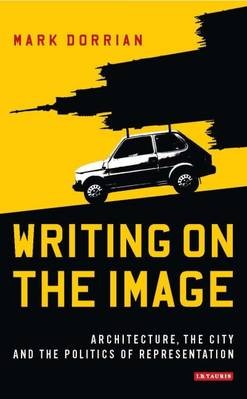 Mark’s book of essays, Writing on the Image: Architecture, the City and the Politics of Representation, will be published by IB Tauris at the end of June. Here are some comments on it: “With the eye of an architect, the …

Mark’s book of essays, Writing on the Image: Architecture, the City and the Politics of Representation, will be published by IB Tauris at the end of June.

Here are some comments on it:

“With the eye of an architect, the pen of a poet, and the toolkit of a skilled critical urbanist, Dorrian brilliantly ranges over the terrain of a fully historified modernity and its representations – from enlightenment Edinburgh, eastwards and westwards, to the Googleplex and beyond. Out there on the high frontier of the spectacle.”
Iain Boal, UC Berkeley and Birkbeck Institute for the Humanities, University of London

“This book of essays, written by one of our best contemporary critics, has a deeply persuasive and pleasurable splendour. The subtle weave and informed precision of its writing and thinking binds us to its subject matter – the ‘unruliness of things’ and the dilemmas of representation.”
Catherine Ingraham, Professor of Architectural History and Theory, Pratt Institute, NYC

“In the spirit of the Adornian “constellation”, Dorrian here provides cultural readings that reveal as much about the ideology and social conventions materialised in urban artefacts and spectacle as about the more particular and fortuitous influences that have gone into their making and reception… [T]hese essays are highly informative of the ways in which culture, both in the past and currently, animates its objects.”
Kate Soper, Professor Emerita of Philosophy, London Metropolitan University

“Mark Dorrian takes in the surroundings that humans are making for themselves today with the keen and original sensitivity of a time-traveller new to the planet, who sees what others fail to see… Writing on the Image unpacks surprising relations between technology and consciousness, between power interests and people. These essays are fresh, richly argued and combative – the effect is at once exciting and sobering.”
Marina Warner, Professor of English and Creative Writing, Birkbeck College, University of London

And here’s the description of the book that appears on the cover:

“Ranging from an examination of the politically-laden spectacle of George IV’s visit to Edinburgh in 1822, as stage-managed by the celebrated novelist Sir Walter Scott, to an analysis of Google Earth’s role in the construction of a new kind of political map, one no longer structured through boundary lines and coloured territories but instead through a politics of image resolution, the remarkable essays in this book present innovative ways of understanding visual phenomena in historical and contemporary culture.

Writing on the Image brings together a series of Mark Dorrian’s celebrated critical writings, developed over the last twelve years. Focusing on issues of elevated vision, spectacle, atmosphere, and the limits of aesthetic experience, Dorrian explores the politics of representation through a series of close readings of the ideological effects of images in their specific contexts. Seamlessly traversing sources from architecture, art, literature, history, geography and film, the essays gathered here exemplify Mark Dorrian’s pioneering approach to architecture and visual culture.

Featuring a Foreword by Paul Carter, and an Afterword by Ella Chmielewska, Writing on the Image opens with a sequence of four historically-oriented chapters that then lead on to considerations of key events in architectural, urban and visual culture over the past decade. Whether it be an eighteenth-century engraving that depicts a magnified drop of tap water as an alien planet swarming with monstrous creatures, an artwork showing a car with the silhouette of a building mounted on its roof, the covering up of a tapestry in the UN before a televised news conference, or a large-scale satellite image affixed to the basement floor of a public building, Dorrian shows how each artefact or event he examines is eloquent in its ability to problematise a larger set of relations beyond itself.”