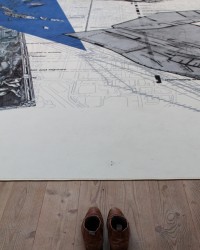 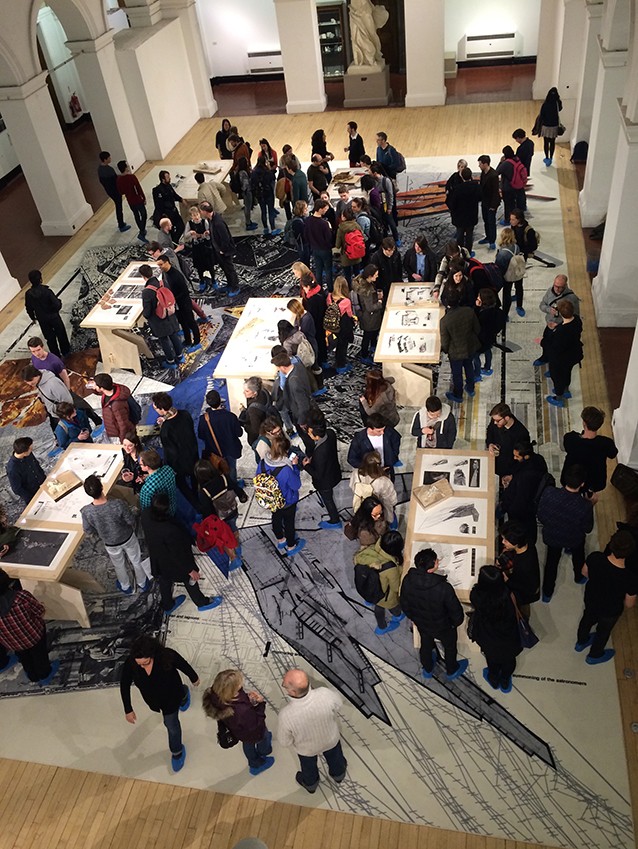 Thanks to Claudia Carbone for this review of the Metis retrospective On the Surface. A version of the text has just been published in the latest issue of Architectural Research Quarterly (arq). Expanding Surfaces by Claudia Carbone Metis experienced The …

Thanks to Claudia Carbone for this review of the Metis retrospective On the Surface. A version of the text has just been published in the latest issue of Architectural Research Quarterly (arq).

Metis experienced
The experience of the exhibition is choreographed as a walk over superimposed fragments of architectural representations, presented in the exhibition space of The Aarhus School of Architecture. This action of walking, following the drawing on the ground, enables the erasure of the specific time/place chronotopes of the seven exhibited projects, allowing new itineraries to be drawn through the crossing of this complex context.
Metis organised the documentation of the exhibited projects as an installation within the printed carpet surface (16m x 10.5m), furnishing it with seven trestles that subsequently supported the explicit representations of the individual projects. Each of these trestles defines a room, a space of exploration.
Upon each trestle two sheets of glass contain and frame one of the exhibited projects. Each project is described through three panels of drawings, which are suspended within the double layer of glass. The upper glass surface also serves as a kind of horizon line upon which a model representation of the project sits.

Metis explored
The spatial configuration of the trestles relates in content to – and designates a specific relation within – the drawing on the floor surface. When carefully walked upon and perceived, the drawing underneath your feet attracts you in the same way that cartographies of the sky often do. This inverted celling draws the viewer from one place to the other through a force-field of multiple projections, each of them with their unique vanishing points and horizons. The projections do not seem to interlock; they are possible arrangements or assemblages that aim at achieving the sensation of being situated in a frozen moment of the dynamic constellation – stargazing. Other actions could be to look in, to zoom in, to explore details, or else to follow structures in this rich surface, like a bird’s-eye view of the earth, observing moments from an empowered vantage point.

Metis examined
Approaching each table you locate yourself in the designated position that the orientation of the trestles facilitates. This then refers to an order where the experience of each project (table) can be associated with the system of display cabinets that furnish a library or museum. This orientation of the body delimits a space for examination of the delicate drawings, and also defines spatial relations between the distant planes in the floor drawing and the proximity of the detail in the dense information that each representation positions close to the viewer’s eyes. This particular position then offers an examination and questioning of the limits of the projects. They re-emerge, among others, in the distance, disturbed and distorted by the overlay of the models and the viewer’s own image, which is doubled through the reflective effects of the glass surfaces.
The focused reading of the drawings and the position of the model is an experience equivalent to that of witnessing an architect’s working table or studying a cabinet displaying samples of fossils or stones in a museum of natural history.
Here, close-up, the models are the most powerful means of representation. Their placement upon the tables engages in such a way that the eagerness to touch them is nearly impossible to resist. This overwhelming desire is only made possible by the inviting display in which, because the models are not restricted within vitrines, haptic experience is unhindered. The models are pieces that exude and evoke a sense of materiality, fragility and detail. They become objects that you want to possess.

Metis recollected
Taken together, the seven projects exhibited display a complex inter-relation between architectural speculation, site and brief. In scale the projects range from landscape, through cityscape, to the dimensions of the body. Six of the seven projects both question and respond to competition briefs. These are site specific and articulated in accordance with their environment. The only exception is the installation piece, Laputa, which is developed in relation to the text of Gulliver’s Travels by Jonathan Swift (first published in 1726).
One project, Micro-Urbanism, can be discussed as an epitome of both the strategy behind the whole exhibition and the particular character of Metis’s approach and creative practice. In this, the spectator is presented with an overload of architectural references distributed through multiple means of representation. The project operates on both introverted and extroverted levels, enriched by its own trajectories, out of and within bounds, theories, histories, narratives, anecdotes, quotes, etc. which engage the viewer in a never-ending architectural endeavour. This project is also the one that interweaves the installation, becoming an interconnecting and almost tectonic tool. It appropriates and covers the entire background of the floor drawing.

Metis contextualised
The Metis retrospective exhibition On the Surface took place at The Aarhus School of Architecture, Aarhus, Denmark, between 10 October and 14 November 2014. The main piece in the exhibition building’s gallery was an installation consisting of a textile featuring a drawing of 16m x 10.5m produced in collaboration with the Danish carpet manufacturer ege.

The project can be seen on the ege website here. 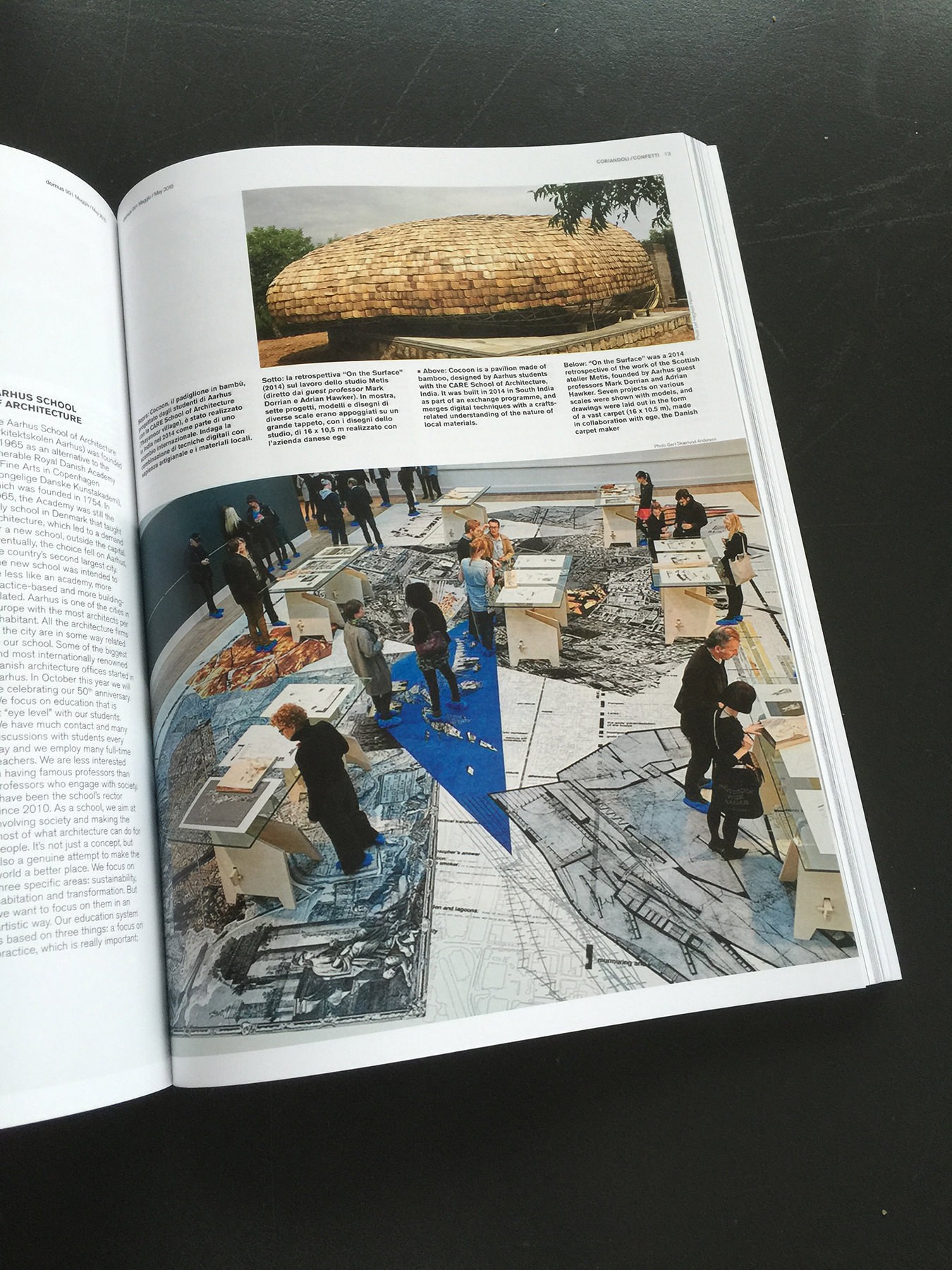 The Metis retrospective exhibition ‘On The Surface’, as it appears in the May edition of Domus. Thanks to Claus Peder Pedersen for alerting us to this, and for the images.

The Metis retrospective exhibition ‘On The Surface’, as it appears in the May edition of Domus.

Thanks to Claus Peder Pedersen for alerting us to this, and for the images.